Background to the SkiRail Map 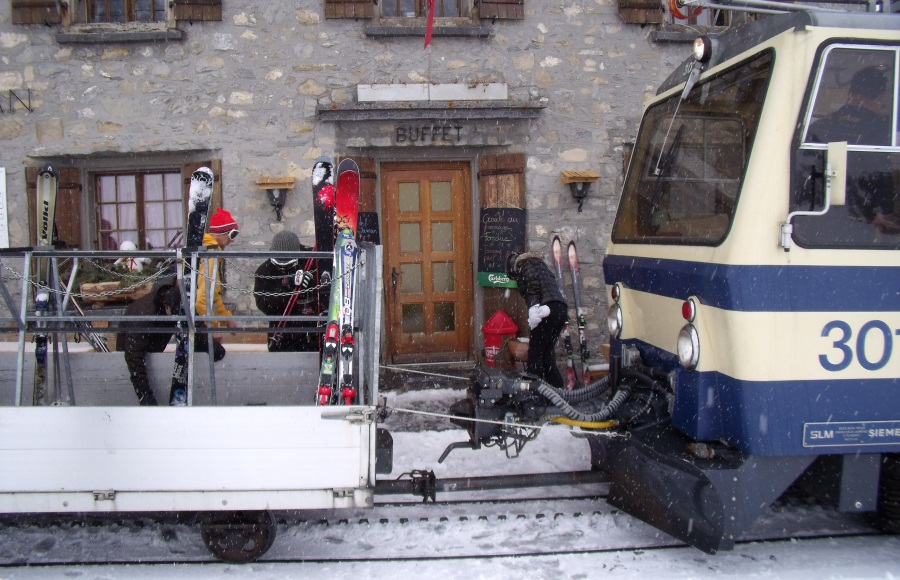 There has never been a better time to travel to, and through, the Alps by train. The continent’s ever-evolving high-speed rail network has brought large swathes of the UK and continental Europe within just ten hours of the major Alpine winter-sports areas. The rail network within the Alps also continues to improve. Recent years have seen the opening of the world’s longest land-tunnel (21 miles) in Lotschberg slashing rail journey times between Zurich and resorts in south west Switzerland such as Zermatt. In neighbouring Austria, a striking new funicular railway recently opened in Innsbruck enabling skiers to access the Nordpark ski area bringing some of the toughest and most spectacular skiing in the Alps within just a 20 minute journey of the city centre.

There are few better ways to travel through a mountain landscape than by train. The conventional airport-to-resort coach transfer is often the low point of any holiday, a gruelling four-hour slog on a cramped seat, getting stuck in traffic james or thrown around precarious hairpin bends. The same journey made by train becomes a highlight of the holiday. Alpine rail travel offers wonderful views, the freedom to get up and walk around, buffet trolleys and restaurant cars, and the chance to experience incredible feats of railway engineering – from the banks of the vast Alpine lakes to spectacular viaducts perched hundreds of metres above the valley floor. The train is also one of the safest and most reliable means of reaching your resort – unlike in the UK, the wrong kind of snow rarely puts a stop to the timetabled services!


A key aim of the SkiRail Map is to encourage people to make their whole journey by rail. We have, therefore, included a smaller-scale map which illustrates the short travel times to the Alps that can be achieved by international train travel across Europe. However, flying remains the cheapest and most practical option for many, and there is still much to be gained from making the airport to resort transfer by train. The Alpine valleys suffer enormously from motor-traffic induced pollution – ozone smog and noise pollution are often as severe as in urban areas, intensified by the topography and climate of the valleys, and road traffic poses a much greater accident threat to travellers and local communities alike than rail.


This map will also appeal to the more adventurous winter sports enthusiast. Many of the places featured are little known to international tourism. These include the beautiful, yet frequently overlooked slopes just a short, spectacular mountain railway trip above Lake Geneva, or a tram ride away from the medieval charm of Innsbruck’s city centre. The ski areas may be smaller, with fewer lifts, but the scenery is just as spectacular, and the slopes invariably much quieter, with cheaper lift passes, ski hire and accommodation than in the better known, glitzier resorts. Furthermore, these are places where you will actually need to speak the local language when ordering lunch at the mountain restaurant or buying your ticket from the tram driver. If you want to experience winters sports without the usual Brits-abroad, package-holiday vibe, these destinations are for you.


We very much hope that you enjoy using the map – it's the first edition and we would therefore welcome any feedback to sales@rogerlascellesmaps.co.uk


Neil Guthrie and the SkiRail Map of the Alps Team